The design simplicity of core drilling tools means that, apart from normal wear patterns, there is little to go wrong, provided the correct bit is chosen for the material to be cut.

Please note the following most common faults and their most obvious causes. If these first measures do not correct the fault, please stop drilling and call the Diaquip Technical Services Dept. for advice on 0161 4060609 or e-mail technical@diaquip.co.uk

A. The Core Drill Fails to Cut

1.   Machine is unstable or insecurely fixed.

2.   Motor is of insufficient power.

3.   The Core Drill is not of the right diamond specification for the material to be cut.

5.   Excessive coolant, causing the drill to slide or aquaplane.

6.   Insufficient downward weight or pressure on the drill.

8.   Excessive play in the spindle or carriage guides.

4.   Run the drill briefly on abrasive material to open-up the diamond surface.

B. The Core Drill Jams in the Hole

1. The material to be cut is too hard for the Core Drill or has hard patches which exceed the diamond specification.

2. Rubble or debris has filled the drilling hole (NB this may include a segment which has broken off).

3. The Core Drill does not have sufficient side clearance for the segments to operate effectively.

1. Replace Core Drill with one suitable for the toughest material likely to be encountered.

2. Ensure adequate irrigation of the drill hole and flush out completely before recommencing drilling

3. Check side clearance (this should be adequate, but not excessive). If necessary, replace Core Drill.

2. Material to be cut is too abrasive for the diamond specification or has unexpected abrasive patches.

3. Motor power is too high.

4. Instability of the machine or excessive play in the spindle or carriage guides.

5. Cooling system is not working adequately.

2. Replace Core Drill with one suitable for the abrasive material likely to be encountered.

3. Fit a motor of the correct specification.

1. Excessive heat due to insufficient cooling.

5. Core Drill has been dropped or damaged in transit.

1. Ensure that the water flow provides the correct level of cooling for the operating speed. Repair or replace segments.

2. Flush the drill hole clear of debris and increase water flow to ensure that problem does not recur. Remember that broken segments may form part of the debris and ensure that these are accounted for and removed, as otherwise these may cause substantial damage. Repair or replace segments.

3. Check side clearance (this should be adequate, but not excessive). If necessary, replace Core Drill.

5. Inspect closely before use and after any transportation. Damage may be in the form of hairline cracks and segments which have been torn off, so close inspection is necessary. Repair or replace segments.

1. Machine is unstable or operating at the wrong angle.

2. Too much play in the spindle or carriage guides.

3. The Core Drill has become damaged and is operating out of true.

4. The Core Drill is not properly fitted.

5. Debris is obstructing the tool.

3. Repair any warped or damaged parts. Ensure that Core Drill is running true before continuing.

4. Check that the Core Drill is correctly aligned and centred on the spindle.

5. Flush the debris from within the drill hole and ensure correct water flow is maintained subsequently.

2. Machine is unstable or positioned at an angle.

4. Drill Motor is not properly fitted to the machine, causing excessive vibration.

5. Carriage guides and spindle fitting are too loose.

1.   Replace with a motor of the correct power.

3.   Overhaul the cooling system, ensuring correct and even flow for the work being undertaken.

4.   Check all the moving parts on the machine, especially spindle, bearings, rollers and carriage guides.  Ensure that parts are centred and operating freely but without excessive play.

Two of the main problems associated with wire sawing are ‘flatspotting’ (uneven wearing of the diamond beads) and wire breakage / connector pull-out. Attention paid to the procedures outlined below will minimise the risk of these problems occurring.

Please note the following most common faults and their most obvious causes. If these first measures do not correct the fault, please stop sawing and call the Diaquip Technical Services Dept. for advice on 0161 4060609 or e-mail technical@diaquip.co.uk

Flatspotting can largely be prevented and/or cured by changing the amount of twist in the wire after every cut, i.e. changing the position of the diamond beads in relation to each other, as viewed by looking at the end of wire in cross-section. 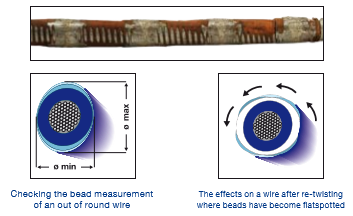 If flatspotting is beginning to occur, re-twisting the wire effectively changes the position of the beads and makes the wire round again in cross-section.  This is only likely to be an effective correction provided that the wire has not gone beyond 0.4mm out of round.

B. Connector Pull Out

These problems can be greatly reduced by paying attention to the following:

Wire breakage and connector pull-out are often confused as being the same thing, but can have quite separate causes:

Wire breakage can also be caused by inattention to some of the connection pull-out warnings, but, in addition, one of the most common causes of failure is a breakage immediately adjacent to the connector.

This breakage is due to the frequency of forward and backward deflection of the wire by the Wire Saw’s pulleys, which will eventually fatigue the wire at its weakest point due to the lack of flexibility near to the connector joint. The length of time until the crimped wire breaks at this point depends on various factors, but in general a shorter connector, or ideally a flexible one, will have a longer life.

On smaller cuts, the connector will often last until the job is completed, but on larger ones it is advisable for the operator to monitor the length of time before a fatigue breakage occurs and, subsequently, to stop the wire and renew the connector within a safe margin of time before a further breakage is expected. This is extremely important, as when a breakage does occur, more damage is likely to be caused by the ruptured wire hitting sharp surfaces at high speed, which can in turn lead to further breakages.

In addition to the above, sawing will run more smoothly if narrow arcs of contact between wire and cut-piece can be avoided, using deflection or satellite pulleys where appropriate to do so. Instructions on connection assembly should also be followed closely. At all times vibrations on the wire during sawing should be kept to a minimum, by watching the process closely and keeping within the machine’s operating parameters.

Good product selection, regular observation and maintenance are the keys to obtaining maximum life from wall and floor saw blades. The following notes should assist you to obtain the maximum life expectancy from blades and help keep within Health and Safety guidelines at all times.

Blades should be checked regularly for cracks, discolouration and signs of overheating or undercutting. All these faults could lead to segment loss, after which it is unsafe to use the blade further.

As most problems occur as a result of incorrect blade choice, inappropriate usage and faults with the equipment (e.g.motor, machine stability and water/coolant supply), particular attention should be paid to these aspects and to the manufacturer’s instructions before sawing commences. When problems occur during usage, the following aspects should be checked as the most obvious causes and solutions, and the machine stopped to avoid further damage.

If these immediate ‘first aid’ measures do not solve the problem, please call the Diaquip Technical Services Dept. for further advice. Do not use the machine again until this is obtained.

A. Loss of Tension / Blade Distortion

1. Saw is not properly aligned.

2. Blade/bond is too hard for the material being cut leading to excessive stress.

3. Attempt is being made not to cut in a straight line.

4. Material has slipped and caused blade to buckle.

5. Fixing flanges are not of correct size, balanced or aligned.

7. Excessive or uneven wear at blade circumference puts pressure on the core.

10. Pre-cut blade has not been used to prepare for deeper cuts.

11. Blade damaged or dropped during transport or handling.

3. Ensure cutting is straight and blade at 180º to material being cut.

4. Ensure that material to be cut is firm and stable.

5. Ensure that flanges are of correct size, uniformly fitted and adequately (but not excessively) tightened.

6. Ensure blade is fitted to spindle without excessive play or tightness.

10. Use pre-cut blade whenever possible or appropriate.

11. Check blades carefully before use. Replace/repair as necessary.

This describes the situation when the steel cores/centres wear more rapidly than the segments on the circumference. It can lead very rapidly to segment loss.

1. Attempting to cut too fast or too deeply in one pass.

1. Do not be too ambitious in depth of cut which is possible at one pass. Multiple shallow cuts may take longer, but will protect the equipment and are quicker in the long run.

2. Select correct blade for material to be cut.

4. Correct fit of blade to spindle.

1. Attempting to cut too fast or too deeply in one pass.

1. Do not be too ambitious in depth of cut which is possible at one pass. Multiple shallow cuts may take longer, but will protect the equipment and are quicker in the long run.

2. Select correct Diamond Blade for material to be cut.

4. Correct fit of blade to spindle.

D. Diamond Blade Will Not Cut

3. Incorrect or altered direction of cut, leading to jamming.

5. Segments have become smooth and are not cutting, even though not fully worn.

7. Excessive motion or play between the carriage guides.

9. Freeback has been reached.

9. Blade is worn out, replace blade.

1 – Flexing due to excessive feed or rotational speed.

2 – Flanges incorrectly fitted/tightened/ balanced (could also be due to debris being trapped between flange and blade – check for this).

3 – Incorrect mounting of blade on shaft – problem compounded when flanges are tightened.

2 – Correct flange fittings and remove any debris trapped between flange and blade.

F. Diamond Blade Distortion / Out of Round / Damage to Arbor or Bore

(Check against the causes listed under E) above, and also consider the following additional possibilities).

1 – Bond too hard, causing diamonds to become prematurely worn and smooth. This leads to ‘pounding’ and loss of blade shape.

2 – Arbor hole does not match shaft diameter or has become worn.

3 – Drive pin not fitted to rear flange or properly located in its retaining hole.

1 – Select correct blade for the material being cut.

2 – Rematch arbor and shaft. Repair or replace arbor if worn.

3 – Ensure that all drive pins are correctly located in their mounting holes.

5 – Check that blade core fits snugly onto its drive shaft.

1 – Select correct blade for material to be cut.

A. Segments ‘Glazed’ and Will Not Cut

1. Line of cut is not straight.

2. Bond too hard – can lead to pounding and fracture of segments.

9. Segment damaged or loosened during transit.

4. Freeback is not a fault. Select new blade.

1. Line of cut is not straight.

2. Bond too hard – can lead to pounding and fracture of segments.

9. Segment damaged or loosened during transit.

2. Select blade and bond suitable for the material to be cut.

3. Check appearance of segments regularly and replace/repair when necessary.

5. Ensure flanges of the correct size, balance and tightness during operation.

10. Reduce depth of cut to minimum necessary to prevent contact with abrasive sub-base (protective segments may be used to protect the blade in extreme cases).

1 – Incorrect match of material and blade – bond too soft.

3 – Misalignment of blade and machine.

3 – Misalignment of blade and shaft.

2 – Ensure flanges of the correct size, balance and tightness during operation.

5 – Ensure that all drive pins are correctly located in their mounting holes.